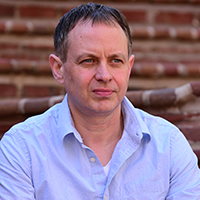 Gerald “Ger” FitzGerald serves as an adjunct faculty member of politics and government in the Schar School of Policy and Government. His expertise centers on in state-minority religion relations. FitzGerald’s doctoral dissertation work focused on comparative historical state-religion relations in Western Europe, with an emphasis on engagement with Jewish and Muslim minorities in the present day. His current interests include the interface between academia and policy at the intersection of religion and international affairs.

FitzGerald recently completed a three-year term as a senior consultant to the British Council, where he managed the flagship Bridging Voices program. Bridging Voices supported three transatlantic research projects focused on the role of religion in promoting social justice in instances of forced displacement, issues related to Sexual Diversity and Eastern Orthodox Christianity, and the concept of a “Muslim Atlantic.”