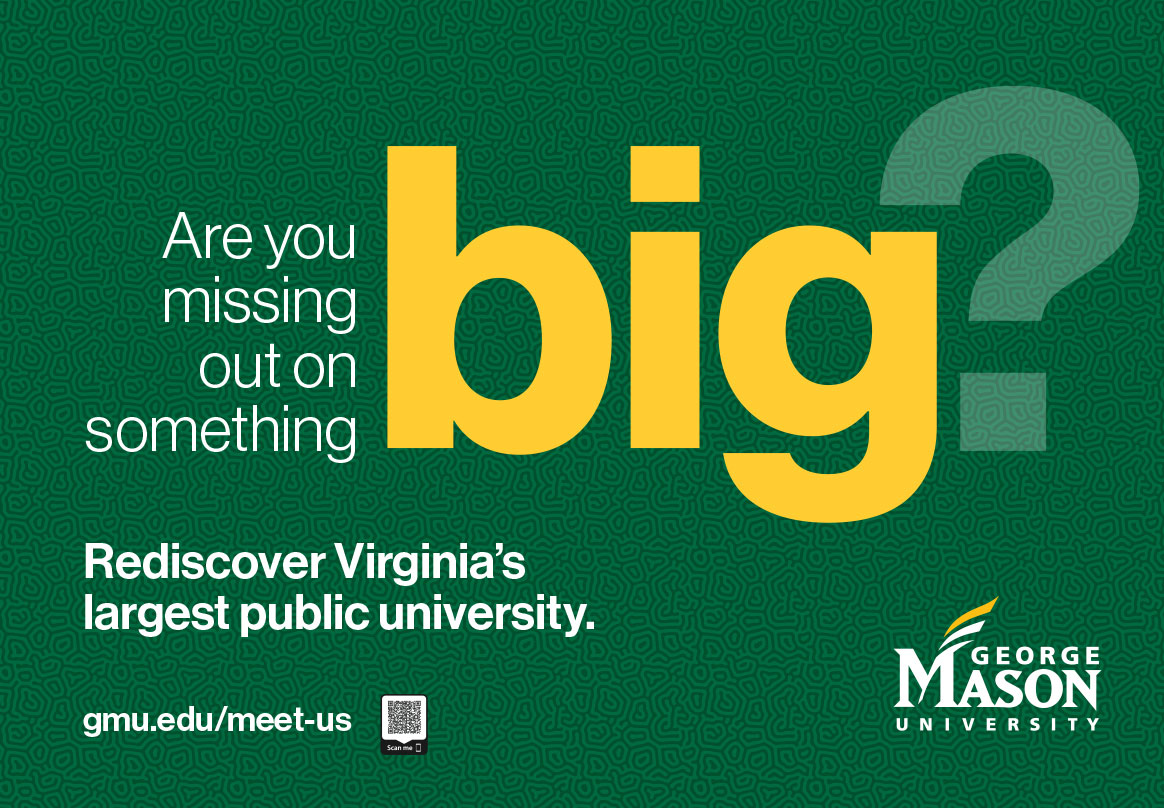 Did you know that George Mason University is Virginia’s largest public university? Its most diverse? Its No. 1 producer of computer technology graduates? The nation’s No. 1 university under 50 years old? America’s fastest-growing public research university?

Most Northern Virginians—and many members of the Mason community—would say, “I had no idea.” Intending it as a compliment, many go on to dubiously describe Mason as “the best-kept secret in Northern Virginia.”

Mason is launching a brand awareness campaign to change that. Called “The Secret’s Out,” the campaign aims to reintroduce Mason to Northern Virginia and to remind the on-campus community, alumni and supporters how Mason has emerged as an educational, cultural and economic driver over the past half-century.

Mason President Gregory Washington and Paul Allvin, vice president of strategic communications and chief marketing officer, each recently completed their first years at Mason. In conversations in the community, and even on Mason campuses, they discovered that many residents lack even basic awareness of the university’s sweeping impact as it approaches its 50th anniversary in 2022.

“Mason is often referred to as one of the best-kept secrets in Northern Virginia, and we need to change that,” Washington said. “We want the entire community, on our campuses and off, to realize they have a highly inclusive, world-class research university in their backyard. The university has grown so quickly that perception has not kept up with reality.”

Created in 1957 as a branch campus of the University of Virginia, Mason became an independent university in April 1972. Since then it has grown to become Virginia’s largest and most diverse public university, and the nation’s fastest-growing public research university. Times Higher Education last month ranked Mason as the nation’s No. 1 “young” university, compared to all others less than 50 years old.

During the pandemic, Mason bucked national trends by attracting record enrollment with record diversity, and celebrating record numbers of new graduates at its virtual commencements.

Those are a few of the facts that will be highlighted during the campaign, an effort to establish a more sustained brand presence in the region and to encourage the community to take a fresh look at Mason.

The campaign, which will extend at least through the fall, will highlight student return on investment and career outcomes, pace-setting faculty, Mason’s standing as the state’s largest producer of tech talent, and other university facts and pride points.

Allvin said as Mason reflects on the last 50 years and envisions the next 50, and as it emerges post-pandemic, it is important to take stock of the totality of influence Mason and its more than 200,000 alumni have on Northern Virginia, from boardrooms to K-12 classrooms to hospitals.

“We can’t be shy bragging about what this university has become, because Mason can be a tremendous source of community pride at a time when we all need inspiration,” Allvin said. “This campaign aims to help our community understand who we are—and are becoming—not just who we were. And internally, everyone owns a piece of the success story, but they might not see the full mosaic of what Mason is accomplishing every day.”

Mason launched a test advertising campaign at Dulles International Airport and Reagan National Airport, each about 20 miles from Mason’s flagship campus in Fairfax, and the university is advertising on strategically chosen Metro stops and bus routes. Additional visual and digital advertising is planned for throughout the region and on Mason’s campuses in Fairfax, Arlington and Manassas—all of which are growing. Videos and stories will run on all of Mason's social media channels.

Area business leaders often remark how the rise of Northern Virginia coincides with the rise of Mason, whose enrollment has tripled to 39,000 over the past three decades.

“George Mason University is helping to fuel our economy while creating unprecedented career opportunities for people of all ages and backgrounds,” said Mason alum Jennifer Taylor, president and CEO of the Northern Virginia Technology Council. “Mason has been, and continues to be, a major contributor for filling our talent pipeline across industries, including in IT, cyber security, cloud computing, AI/machine learning, and data analytics.”