Register to attend the Virtual Exhibition

Login to the Virtual Exhibition 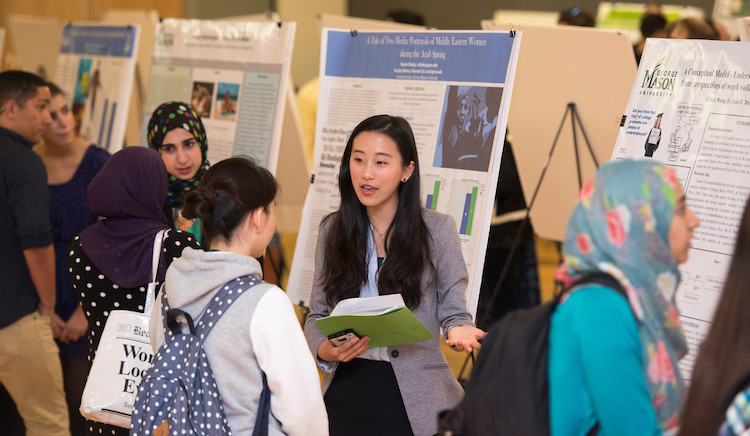 Even while under social distancing, Honors College students remain ready to learn. During the week of May 11th through May 15th, the Honors College invites students to experience a first-ever Virtual Research Exhibition. In this online format, students can view video presentations by their peers, who have been working hard on research projects throughout 2019-2020 academy year.

Starting Monday the 11th, 60 presenters will showcase their research through short “lightning talk” videos posted on the Virtual Celebration of Student Scholarship website.  You'll need to register first, then login, then find the Honors College presentations wthin the University-wide event. Throughout the week, viewers are encouraged to leave questions for presenters to engage with during this time. In addition to these short, pre-recorded videos, many students will also present and answer questions about their work live. The full list of participating presenters can be found at the end of this article.

In her project, “Estimating Traffic-Related Air Pollution”, chemistry major Karlin Moore takes a closer look at an issue very relevant in today’s culture. “Over 200,000 deaths occur in the U.S. each year due to air pollution,” she says. In her research, Moore explains how traffic-related air pollution (TRAP) can be one of the most harmful forms of air pollution and discusses methods for estimating how much pollution an individual has been exposed to.

“Future models of track exposure will lead to improved personal exposure estimates,” Moore emphasizes, “[which] will inform people on how to reduce their exposure to track and lower their risk for associated health conditions.”

“I believe that when there is a pressing contemporary issue, it is important to investigate it and present those findings to both raise awareness of that issue and develop possible solutions for it,” says freshman English major Jasmine Okidi, another participant in the virtual research exhibition this spring.

For the past ten years, Okidi has been a witness to the rapid wetland conversion in Kampala, the capital of Uganda. Through her research, “Degradation of Wetlands in Kampala”, Okidi proposes a proactive three-phase plan for educating the public on the current state of the area: 1) survey the community, 2) spread information, and 3) assess how perceptions are influenced. “It is important to progress to the ‘what now?’ stage [of protecting the wetlands] where we search for better conservation strategies and seek to inform greater masses of people of these efforts and why they matter,” she concludes. Okidi’s research is driven by a passion to help inspire others to fight for conservation in their communities.

Freshman English major Elise Mertz’s presentation is an expansion of her HNRS 110: Research and Inquiry project, “Overexcitabilities (OEs) in Gifted Adolescents”, which she initially presented at Honors’ Fall Research Exhibition. “[The purpose] is educating other people and offer[ing] understanding,” Mertz explains, as she identifies the five areas of overexcitabilities – emotional, imaginative, intellectual, psychomotor, and sensual – and explores how individuals with OEs interact differently with the world around them.

“This research is important for anyone working with gifted adolescents, including parents, teachers, principals, librarians, and counselors, as well as for the gifted adolescents themselves,” Mertz explains, acknowledging that the topic is relevant to the many adolescents facing learning challenges without a social support system.

In her HNRS 360: Multi-Disciplinary Topics, Environment and Sustainability studies junior Olivia Garcia explored the relationship between energy and culture with her paper on “how the construction of the Grand Ethiopian Renaissance Dam (GERD) will affect the politics of the Nile Basin region, primarily between Egypt, Ethiopia, and Sudan.” To conduct her research, Garcia looked at the history of Nile hydro hegemony, or the political dominance over the river basin. Egypt has long dominated the basin through multiple water allocation treaties, but with the construction of the GERD, Ethiopia has a “huge opportunity to shift the historical hegemony within the region” by holding control of the water flow of the world’s longest river and increasing the economic development of the entire region.

“This dam represents how an energy infrastructure project can affect and challenge the established norms of a culture in a region,” Garcia concludes.

For her OSCAR URSP research under Dr. David Luther, biology major Margaretta Walker assesses the conservation success of Alliance for Zero Extinction (AZE) sites for both AZE species and non-AZE species. To achieve this, Walker compares the level of protection offered by AZE versus other Key Biodiversity Areas (KBAs) and how that protection has changed over time. Her methods included first mapping the spatial ranges of endangered or critically endangered mammal, amphibian, and bird species on a base layer of protected areas and AZE sites, then identifying overlap. “While AZE sites may receive more conservation attention in the media and government discussions than other KBAs, they do not necessarily receive more conservation action of actually increasing protection,” explains Walker.

Her data analysis suggests that AZE sites protect a wide array of species, not only those formally designated as AZE. To curb extinction for all species, Walker suggests the United Nations Convention on Biological Diversity adopt protections for more AZE sites as part of their 2030 Sustainable Development Goals.

In HNRS 361: Multi-Disciplinary Practicum, taught by Professor Stafford, junior economics major Molly Harnish had the opportunity to explore an idea that sparked her attention while visiting the Cherokee National Forest in Tennessee: “What factors affect how people use natural resources, particularly, how people use forests?” According to her literature review, the answer lies in institutions. “We don’t make decisions in a vacuum, we make them surrounded by context, laws, and customs.”

To conduct her research, Harnish will investigate the relationship between publicly owned forests and the timber industry, and how resource use differs across state lines. Her economic analysis will focus on Florida and its greater region as defined by the USDA Forest Service. Harnish intends to continue with her proposal through OSCAR’s URSP and expand the data analysis into her undergraduate thesis. Her research is relevant to policymakers, landowners, and the larger political economy question regarding institutions and markets.

Through OSCAR’s STIP, Environment and Sustainability Studies senior Ben Rhoades was able to participate in one of the first evaluations of microplastics in the tidal Potomac River. “Microplastics are pieces of plastic between a 0.33 mm and 5 mm,” says Rhoades. They pose a risk not only to aquatic species by polluting waterways and acting as vectors for toxins and disease, but “humans have been found to ingest plastic,” too.

Rhoades and his team’s study involved trawling for microplastics on the surface of water at three separate sampling sites and identifying the correlation between percentage of developed land in a watershed and concentration of microplastics in adjacent waterways. “[What] we did learn for sure is that there are microplastics in the tidal rivers of the National Capitol Region,” concludes Rhoades. He hopes to see further research conducted on variables such as rainfall events, percentage of impervious surfaces, population density, and intensity of development.

Freshman biology major Kim Laura spent her semester in HNRS 110 researching the economic impacts of Germany’s unmet reparations from the Treaty of Versailles during the 1920s. Laura answered her question by analyzing the scholarly conversation around Germany’s economic status. Economist John Maynard Keens argued that Germany had no ability to pay reparations, while others suggested that the Dawes Young Plan provided sufficient aid. “These two perspectives arise based on the evidence they were looking at and the type of research, too.”

By examining research from a different historical era, Laura was able to gain perspective on a new topic and how “research keeps evolving, and these interactions [between sources of impact] as well.”

By Audrey Butler and Sophia Chapin