Mason alumna is a champion for clouded leopards

The clouded leopard gets its name from its large cloud-like spots.

Jilian’s grandfather, Hannibal, lives out in Front Royal, Virginia, at the SCBI, home of the Smithsonian-Mason School of Conservation. 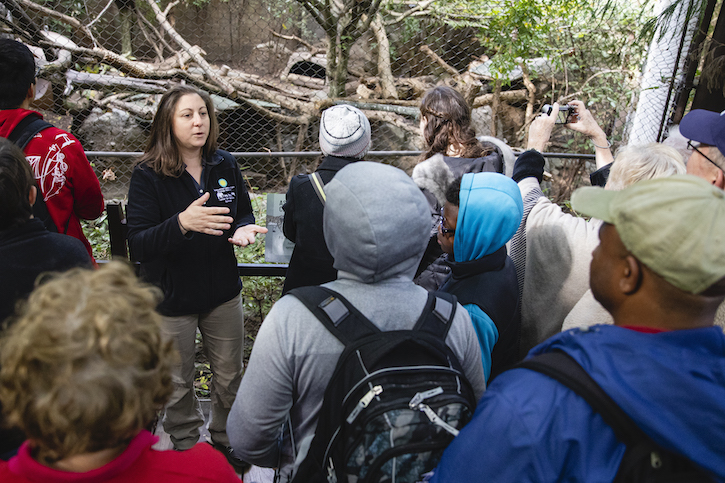 Mason alumna and adjunct faculty member Jilian Fazio (in black) gives weekly talks at the Smithsonian's National Zoo about the conservation of the clouded leopard species. Fazio is the species survival plan coordinator and international studbook keeper for the clouded leopards. Photo by Lathan Goumas/Communications and Marketing.

The clouded leopard cubs romp around their enclosure at the Smithsonian’s National Zoo for a few hours each day, practicing their tree-climbing skills and mugging for visitors. The cubs—a male named Paitoon and a female named Jilian—are the newest residents on the zoo’s Asia Trail and made their public debut in September.

Once a week those gathered to watch the cubs get to chat with Mason alumna Jilian Fazio, who knows a lot about clouded leopards. A postdoctoral research fellow for the Smithsonian’s National Zoo and Conservation Biology Institute (SCBI), Fazio has been working with cloudeds since she was a graduate student at Mason and an animal keeper on the Asia Trail. And yes, Jilian the cub is named after her.

Fazio, who earned a MS in 2010 and a PhD in 2016, both in Environment Science and Public Policy, is the clouded leopard species survival plan (SSP) coordinator and international studbook keeper, which is a volunteer position that she was elected to in 2016.

“The studbook itself is a historical record of all the clouded leopards that we’ve housed and information about the individuals globally,” said Fazio, who also teaches in Mason’s School of Integrative Studies. “It's an intense records system, and it's all dependent on the one person who's holding the studbook at the time.” 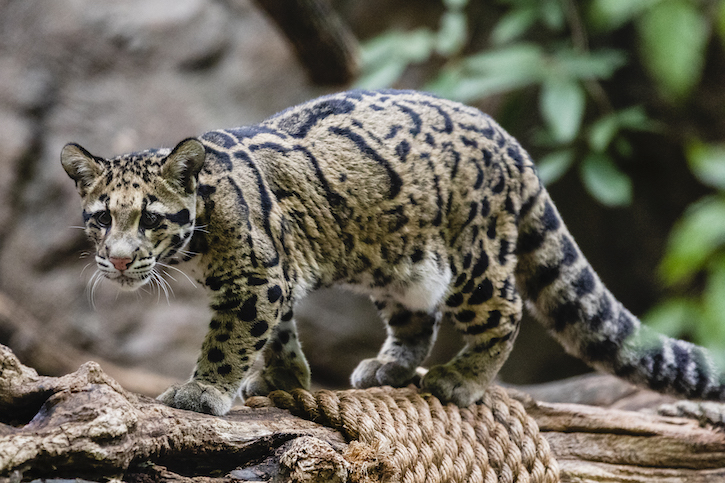 Jilian is one of two clouded leopard cubs currently at the Smithsonian's National Zoo. She is named for Mason alumna Jilian Fazio, who is the species survival plan coordinator for clouded leopards worldwide. Photo by Lathan Goumas/Communications and Marketing.

When Fazio says “we” she is referring to all the keepers of clouded leopards in zoos and animal parks worldwide. The records are incredibly detailed and include information about the animal’s genetics, how it was reared (by people or by leopard), and specifics about its personality, especially if it is aggressive.

This information is extremely valuable because there is still a lot unknown about the mysterious cloudeds, which are listed as Vulnerable by the International Union for Conservation of Nature Endangered Species Commission. In the wild, the mid-sized cats spend much of their time in trees, and their behavior isn’t easily observed.

Breeding the cloudeds in zoos has proved challenging and sometimes deadly for one of the animals. Keepers have found pairing the leopards while they are still cubs may produce more harmonious outcomes. That’s where Fazio comes in as a matchmaker of sorts to the cloudeds. While a master’s student, Fazio worked at the Thailand Clouded Leopard Consortium on a behavioral assessment, kind of like match.com, to determine which cats are more likely to be reproductively successful, which means more baby leopards or what Fazio calls “cubs on the ground.”

Clouded leopard cubs are usually born in the late winter/early spring, and by April, it is matchmaking time. Now, as the SSP coordinator, it’s Fazio’s job.

“I decide which cats to pair to make the best genetic matches, and maintain population demographics” Fazio said of the cubs. “I try to pair them before they are sexually mature, especially the males, so that they're not solitary cats for the rest of their lives and can contribute genetically to the population.”

Paitoon and Jilian were born at the Nashville Zoo, and it was the keepers there who named the cub for Fazio, sending her a cellphone picture of the newborn cub on Easter morning. Fazio is excited to have the cubs at the zoo to represent the science and conservation of the species.

“The more guests that visit the clouded leopards, the more people will watch them and learn something,” Fazio said. “Just one snippet of information about them may make that connection. Then we will have more clouded leopard champions, and the more we can get, the better. There are so many species in need of conservation efforts nowadays that we really need people to understand what zoos do and how they can help us meet our goals.”