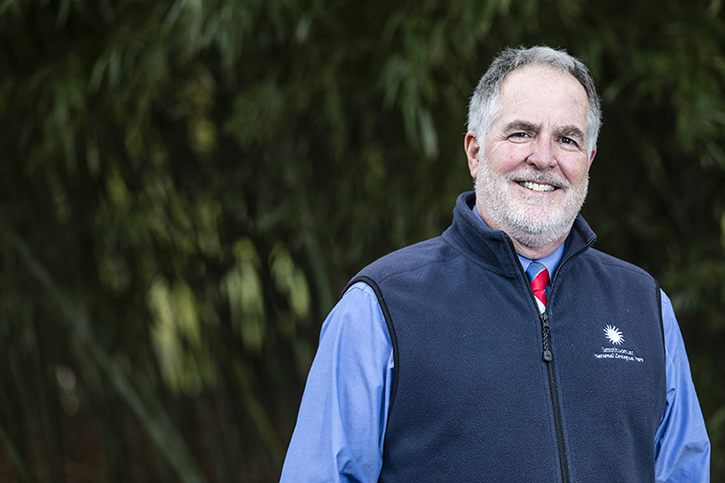 George Mason University alumnus Steven Monfort was named the director of the Smithsonian’s National Zoo and Conservation Biology Institute in September after having served as acting director since November 2017.

Monfort, who earned a PhD at Mason in environmental biology—public policy in 1993, began working for the Smithsonian Institution in 1986, rising through the ranks as a veterinarian and scientist while researching animal hormones and helping to spearhead many of the National Zoo’s conservation efforts. In 2006, he became the director of the Smithsonian Conservation Biology Institute (SCBI) in Front Royal, Virginia. In that role, Monfort cofounded the Smithsonian-Mason School of Conservation, an in-residence program at SCBI that immerses Mason students in an interdisciplinary, conservation-learning environment.

Q. Congratulations on the official promotion in September. You’ve certainly got a lot on your plate now, overseeing both the 163-acre facility in Washington, D.C.’s Rock Creek Park, as well as the 3,200-acre SCBI campus in Front Royal, 321 full-time employees and a combined federal and nonfederal budget of $45 million for fiscal year 2018. Can it all be a bit overwhelming at times?

A. Yes, this is a complex organization—this is a matrix. You have a zoo with two million visitors every year here in Washington, a conservation facility that’s not open to the public 70 miles away—in Front Royal—and we have a 65-year-old partnership with the Friends of the National Zoo, which is embedded within the zoo as a separate tax-exempt organization. And then there are things like our maintenance and construction programs here at the zoo and in Front Royal that are also headed by a separate part of the Smithsonian. So, if you look at what I’m managing, I’m managing from the center, but I have formal control over only about one-third of the employees that help us achieve our mission of saving species. It’s a bit like being a mayor of a small town. You govern, and you have a certain number of municipal staff that work for you, but you actually have all these other businesses and public facilities that are part of your community but not under your control. So you’re trying to set the framework for your culture that supports the mission. It’s quite a challenge.

Q. How did your experience at Mason as a doctoral student prepare you for this moment?

A. The truth is that in the ’80s, I was not trained to be a conservation biologist. That is a specific disciplinary area within science that’s still probably not widely understood. Basically, the word “biodiversity” was coined the same year I graduated undergrad [from the University of California, San Diego]. The first textbook on conservation biology didn’t come out until 1988 when I had already graduated veterinary school two years [prior].

So when I came to Mason, there really was no such thing as conservation biology course work. So my degree was in the specialty area of environmental science and public policy. I did research on reproductive biology of endangered deer species.

So what did it teach me? My experience at Mason was really focused on becoming a scientist. It was transitioning from being a veterinarian to being a full-fledged principal investigator who could lead a lab program, who could pursue a whole area of inquiry over a career.

It was a pivotal moment in my career. Mason trained me to be a scientist. That’s where I learned to be a critical thinker, to be able to articulate the problems and create a set of objectives to test hypotheses.

Q. How personally important is the one-of-a-kind relationship you formed between the Smithsonian Institution and Mason with the Smithsonian-Mason School of Conservation?

A. The partnership with Mason became one of the most significant things I’ve ever done. How do you transform the way you educate young people to believe they can make a difference? Now, we have a school that represents a leading edge, where a young person can come and be embedded within the science community and understand how they can make a difference. Kids today want to make a difference. They want their lives to have meaning, and they want to be a part of something bigger than themselves. Mason and the Smithsonian together are making it possible for hundreds of people to pursue their passion for conservation, and that’s a very powerful thing for me.

Q. How would you assess the program’s effectiveness since its inception in 2008?

A. It’s really still a start-up. We continue to test new programs, and we have some really great ideas about taking it to the next level. We’ve been trying hard to send people on the road [and] make partnerships with other universities. We’re trying to train the next generation to solve problems that don’t even exist yet, much less the kind of problems that are already here, like climate change.

What’s next? We don’t know, but the model can be extrapolated and used elsewhere. So, if we can demonstrate the value of this program, then it can be repeated elsewhere and expanded.

Q. What advice would you give students considering a career in conservation?