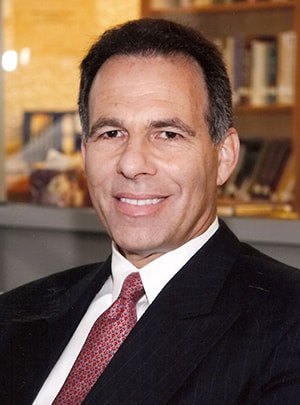 The Carnegie Corporation of New York announced today that Schar School of Policy and Government public policy professor Jack Goldstone is one of 27 recipients of this year’s Andrew Carnegie Fellows Program awards.

“Really quite a surprise,” Goldstone said upon learning of the award.

Goldstone, who has been with the Schar School at George Mason University since 2003, is the director of the Schar School’s Center for the Study of Social Change, Institutions and Policy and is the Virginia E. and John T. Hazel Chair Professor of Public Policy.

The award provides a $200,000 stipend—the largest of its kind, the corporation says—toward funding research in the social sciences and humanities. Goldstone has spent his career researching the intersection of population trends and, he said, is about to take an even deeper dive.

Goldstone begins his fellowship in September. His research, he said, will look at how different population trends will affect international economy and security. It will be an extension of the research he has been doing through a multi-year, $1.1 million grant from the Charles Koch Foundation he received in March.

But whereas the Koch grant mainly provides summer salaries and support for Goldstone’s Schar School PhD student-researchers, the Carnegie fellowship will allow him to take a year to write what he hopes will be a significant book addressing these issues.

“Right now, population change is really confronting the world with lots of challenges,” said Goldstone, who was nominated for the fellowship by the university. “How are we going to support and care for aging generations when we’re facing a huge economic downturn? How will the young, fast-growing labor force in Africa and South Asia be productively employed?”

“And if the shift in world population in religion is leading to a world where Muslims will be more numerous than Christians for the first time in history, we need to work out a cooperative relationship between them,” he said. “If we don’t do that and deteriorate into confrontation and conflict, then we go back to the Middle Ages, where Islam and Christianity are at war all over the world.”

Goldstone said he has been able to pursue these questions because of the Schar School’s rich interdisciplinary environment, not to mention its “wonderful graduate students.”

“Jack Goldstone is that rare social scientist whose scholarly insights have shaped the thinking of both academic researchers and policy professionals on such critical topics as revolutions and political demography,” said Schar School Dean Mark J. Rozell. “His work embodies the Schar School’s commitment to leading both scholarship and public policy impact.”

“It’s another affirmation,” Goldstone said of his fellowship, “that the work my colleagues and I are doing at Mason on global population trends addresses major social challenges. I am deeply honored to get this support from the Carnegie Foundation.”

Mason is one of just 15 universities nationwide with three or more Carnegie Fellows, including Yale, Duke, Harvard, Stanford and MIT.