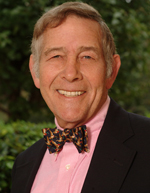 In 1975, New York City nearly defaulted on billions of dollars of debt. Not a great moment in the city’s history, but it did help School of Public Policy Professor John Petersen win a National Science Foundation grant. Petersen, who had worked in the municipal bond industry, was representing the state and local bond issuers and proposed establishing guidelines for the content of disclosure statements. When asked by NSF about the need for the research, he mailed the grant committee a front-page article from the New York Times on the City’s pending insolvency. He got the grant.

The resulting guidelines were subsequently voluntarily adopted by the market as standards and became recognized as authoritative by the Securities and Exchange Commission and in various court proceedings. They were a major contribution to the market, which has more than $3 trillion in municipal bonds outstanding.

For at least the next two years, Petersen will contribute even more to the market as a public member of the Municipal Securities Rulemaking Board (MSRB), which regulates the banks and securities dealers that make up the municipal bond industry. You could argue that no one is better suited for the task.

Early in his career, Petersen lobbied for the Investment Bankers Association. “The municipal bond market was a sleepy corner of Wall Street,” he says. The association supported the formation of a self-regulatory organization (SRO), which led to the creation of the MSRB in 1975.

When the association moved its headquarters to New York City, Petersen stayed in Washington, D.C., and represented the governments. “There was a concern that it was an industry-dominated SRO and would potentially regulate the access of governments to the market,” he recalls. So he helped lobby for amendments that limited the scope of the MSRB at the time.

Fast-forward to 2010: The Dodd-Frank Wall Street Reform and Consumer Protection Act enlarged the MRSB’s purview to include not only bond underwriters and dealers, but those who provide financial advice to governments. It also changed the Board’s composition by making the majority of the members public representatives, as opposed to those representing the industry itself

Petersen offers direct experience, historical knowledge and the benefit of having worked outside the industry for more than a decade. As they write new rules, the Board will face challenges, but the overall goal is clear: “We want to make the market as safe, transparent, and efficient as possible for both government issuers and the investors,” Petersen says.